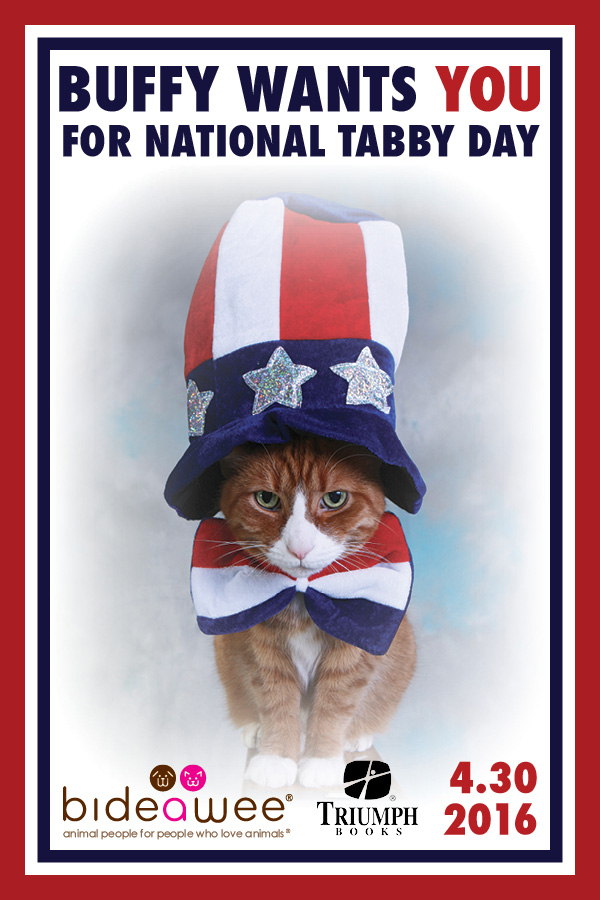 The idea is to celebrate tabby cats and educate that tabbies are not a cat breed but in fact a coat pattern.

The spokescat for the event is Buffy, whose new book Making The Most of All Nine Lives  is now available.

Here are some really fun facts about tabby cats — and lots of reasons to celebrate them.

A TABBY CAT IS NOT A BREED OF CAT. Tabby is a coat pattern that is reminiscent of the coat pattern of the wild ancestors of today’s domestic kitties.

There are four tabby coat patterns:

called blotched, has wide, dark stripes curving over the flanks and the shoulders and three large stripes running from the shoulder blades to the base of the tail.

The origin of the word tabby seems to have an uncertain history. Some claim the name is associated with a type of striped, patterned silk called Atabi made in Attabiah in the Middle East. Others claim that it comes from the Spanish tabi, a kind of cloth with irregular tie-dye-like markings.

Morris, the orange tabby who is the spokescat for 9Lives cat food, has been one of the most recognizable feline faces in the United States since 1969. The first Morris was rescued from a Chicago animal shelter by trainer Bob Marwick in 1968. He was twenty minutes away from being euthanized! He eventually became an honorary director of Star Kist Foods, with the power to veto any cat-food flavor he didn’t like. He was invited by President Richard Nixon to cosign (with a paw print) the National Animal Protection Bill. In 2006, the spokescat spearheaded a national campaign to find homes for 1 million cats.

The First Algonquin Cat was an orange Tabby that hotelier Frank Case named Rusty. The cat was a stray and had wandered into the hotel seeking refuse from the rain. Case gave him a glass of milk at the counter in the Blue Bar and invited him to stay. Job Barrymore who was playing Hamlet on Broadway at the time and who was a friend of Frank Case suggested that Hamlet was a much more dignified name. And so a tradition began. All the male Algonquin cats since have been named Hamlet and the females are Matilda. The incumbent Algonquin Cat is Matilda III. Case’s pet-friendly policy dates back to the Twenties and was instrumental in the idea of hotel cats around the world today.

Garfield is an orange tabby

Thomas O’ Malley the tabby in the Disney movie The Aristocats

There are two legends surrounding why tabbies have an M marking on their foreheads:

Sir Winston Churchill was Prime Minister of the United Kingdom twice. He was unabashedly besotted about cats. It was his dying wish that a marmalade-colored tabby with four white socks and a white bib and named Jock should reside in perpetuity at Chartwell, his ancestral home in Kent, England, now a hugely popular tourist attraction and visited by ailurophiles from around the world.

Jock I was an 88th birthday present given to him by Sir John “Jock” Colville, one of his private secretaries. Sir Winston was so attached to the cat that the feline often attended important meetings and even accompanied Sir Winston on road trips to London, cuddling into him on the back seat of the car. And, rumor has it, that meals in the Churchill household did not commence until Jock was present at the table. The incumbent cat at Chartwell today is Jock IV.

So many major pet brands use both grey and orange tabbies in their brand advertising. Friskies has an Orange tabby and so does Meow Mix, Arm and Hammer cat litter and Fresh Step and many more.

Everybody loves tabby cats. Across the board tabby cats are considered to be intelligent, sassy, very affectionate and wonderful companions.

The hashtag for this event is #NationalTabbyDay.

Let’s get it trending!