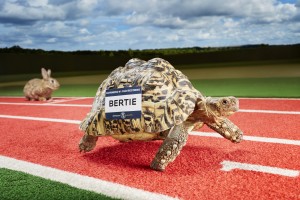 A sprinting tortoise, a coordinated canine, and a set of barnyard dynamos have made their way into the new Guinness World Records book! After researching and scouting the animal kingdom for over a year, today, the global authority on record-breaking achievement, announces the best new pet and animal records from the new GUINNESS WORLD RECORDS 2016 edition, including a goalkeeping pup and the furriest rabbit around.

Fastest tortoise
The Greatest speed achieved by a tortoise is 0.92 feet/second and was achieved by “Bertie” at Adventure Valley, Brasside, Durham, UK on July 9, 2014, breaking a record which had stood since 1977!. Twice as fast as previous record holder “Charlie,” at his current speed, Bertie could clock 100 meters in 6 minutes. His pacey moves were brought to owners Marco and Janine Calzini’s attention, when visitors to Adventure Valley often noted that he was much faster than your average tortoise. Since setting the new speed benchmark, Marco says, “Bertie now lives in a luxury enclosure with his girlfriend Shelly and his Guinness World Records certificate proudly displayed on the wall. To be in the book is a dream come true, a massive achievement!” Whilst Usain Bolt enjoys tucking into chicken nuggets before a big race, Bertie just needs his favorite snack – strawberries. 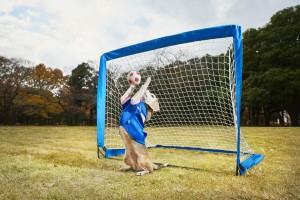 The Most balls caught by a dog with the paws in one minute is 14 and was achieved by 9-year-old Purin and her owner Makoto Kumagai (both Japan) in Sakura, Chiba, Japan, on March 22, 2015. Purin, who has broken her own previous record of 11 to make it into this years’ book, is a multi-talented pooch – the beagle from Tokyo can also skateboard, walk on two legs, rope skipping and has many other impressive skills. Makoto has owned Purin since she was born. “Purin is calm, happy and always eager to play,” says Makato. “She’s scared when around larger dogs, but since she lives with a cat, is more comfortable with animals her own size.”

“Pet records are some of the most popular Guinness World Records titles and readers can’t wait to see all the jaw-dropping new animal exploits year after year,” says Guinness World Records Editor-in-Chief Craig Glenday. “The 2016 edition features an impressive mix of talented household pets and barnyard behemoths from around the world. One of my favorites from this year’s batch is our new fastest tortoise, Bertie. As with all of our records, loads of research, scouting and verification goes into finding these amazing animals and we’re delighted to share them with our readers.”