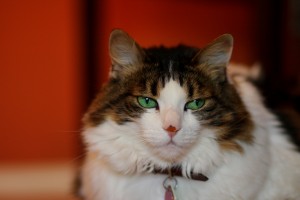 Researchers from the University of Missouri and the 99 Lives Cat Genome Sequencing Initiative today announced groundbreaking discoveries of novel mutations in the cat genome found to correlate to two human eye diseases, retinitis pigmentosa and Leber’s Congenital Amaurosis. The 99 Lives Cat Genome Sequencing Initiative is a joint project between the University of Missouri, the University of California, Davis and industrial partners. The Maverix Analytic Platform was used to analyze this data, and Maverix hosts the Initiative’s genome and analysis data in a publicly-accessible “Community of Discovery.”

Leber’s Congential Amaurosis (LCA) is a rare inherited eye disease that primarily affects the retina, which is the specialized tissue at the back of the eye that detects light and color. LCA is one of the most common causes of blindness in children. With onset at birth or early in life, two to three per 100,000 newborns are born with LCA. Persian cats can suffer from autosomal recessive progressive retinal atrophy (PRA), a disease similar to LCA. Association studies of Persian cats localized the causal gene for Persian PRA to cat chromosome E1, which is homologous to human chromosome 17. Whole genome sequencing revealed mutations in the gene AIPL1. A variety of mutations in AIPL1 have been identified as causes of various types of LCA in humans.

By finding that the putative causative mutation for Persian PRA is in the gene that can cause LCA in humans, researchers may be able to develop models to better understand the disease pathways associated with this rare eye disease and ultimately develop diagnostic and screening tests that will improve treatment.

Retinitis pigmentosa is a condition affecting about 1 in 4,000 people in the United States. Cells in the retina controlling night vision are most likely to be affected, and symptoms include decreased vision at night or in low light, and loss of peripheral vision, commonly known as “tunnel vision.” Symptoms often first appear in childhood but severe vision problems often do not develop before early adulthood. The whole genome sequencing of a Bengal cat found a causative genetic mutation for retinitis pigmentosa, which can serve as a model for research leading to better understanding of the causes and potential treatments for this condition in both cats and humans.

“We are thrilled that the whole genomic sequencing of cats has led to such impactful discoveries which we believe can provide an efficient and effective model for research into eye diseases affecting humans,” said Leslie Lyons PhD, Gilbreath-McLorn Professor for Comparative Medicine at the University of Missouri-Columbia. “Using whole genome sequencing enabled us to find this mutation, which would not have been possible using traditional microarray technology.”

“To whole genome sequence cats with disease traits as a routine tool will unravel simple and complex traits relevant to human health,” said Barbara Gandolfi PhD, Research Assistant Professor at the University of Missouri-Columbia. “With the help of the Maverix Analytic Platform, our first identified mutation associated with a progressive retinal atrophy in Persian cats provides a model for the study of blinding disease in humans.”

“We are pleased that the discovery of these novel mutations in cats has tremendous implications to further the understanding of LCA and retinitis pigmentosa,” said Dave Mandelkern, President and co-founder of Maverix Biomics. “We are excited that the 99 Lives Cat Sequencing Initiative is helping to advance state-of-the-art healthcare for cats as well as to help improve human health.”

The 99 Lives Cat Genome Sequencing Initiative is a project designed to sequence the genome of 99 cats in order to improve coverage and future assemblies of the cat genome; identify genotypic variation across a large number of cats with diverse genetic backgrounds, helping to identify causative mutations for specific health conditions in cats which may also be relevant to humans; and increase the value of individual cat genome sequencing by veterinary hospitals providing state-of-the-art health care.