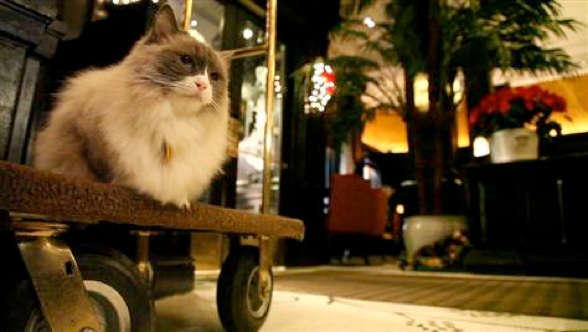 The cat is out the bag. New York’s historic Algonquin Hotel has introduced guests to their newest staff member: an adopted ragdoll cat named Matilda III.

After serving as the hotel’s “Directfurr of Guest Relations” for more than 13 years, incumbent cat Matilda II has retired to a classic pre-war apartment in Brooklyn, the hotel announced. The new Matilda is the 10th resident feline at the landmark lodging on West 44th Street in midtown Manhattan.

“The sendoff was bittersweet,” said Alice de Almeida, Matilda II’s executive assistant and “opposable thumb,” who has answered thousands of e-mails and letters from admirers of the famed feline. “I couldn’t help crying when the limo drew up in front of the hotel and everyone lined up to wish the retiring Matilda well in her new life of domestic bliss.

“She deserves some peace and quiet and carte blanche to climb on furniture and sleep on a bed,” de Almeida added. “The latter wasn’t part of her job description.”

Instead, Matilda II greeted thousands of guests, provided a “fur fix” for cat lovers missing their own pets back home, and posed for countless souvenir photographs in the hotel lobby on her custom-made $700 chaise lounge. Last August, her 15th birthday celebration was a major charity event that included a feline fashion show to benefit North Shore Animal League America. But after her long service, de Almeida felt it was time for Matilda II to retire and be allowed to catnap out of the public glare.

Her replacement has secretly been in residence at the Algonquin for a month, getting to know her way around her prestigious new home. The staff was sworn to secrecy, and guests never noticed the switch.

“We asked North Shore Animal League America to help us find a feline to follow in her paw prints,” said de Almeida, who “interviewed” three felines for the position.

Matilda III was dumped unceremoniously in a box with another pedigreed cat at the League’s Washington, N.Y., headquarters. “They called and I went right over,” de Almeida explained. “I knew she was right the moment I played with her; she has a wonderful disposition.”

The new Matilda also has markings similar to her predecessor’s, which could explain why guests failed to notice that a different cat was strolling the lobby and manicuring her toes on a luggage cart. Maybe they were just too relaxed while sitting in the famous lobby and enjoying the hotel’s signature drink, the Matilda cocktail — a concoction of champagne, orange juice, Cointreau and vodka.

Kitty not eating? Maybe the furry faker’s mad at you

The oldest operating hotel in New York City, dating back to 1902, the Algonquin has had a resident feline since the 1930s. Frank Case, owner of the hotel in the 1920s, made it a trendy place for famous literary and theatrical figures to eat, play and stay.

Legend has it that one cold and rainy night, a wet and hungry orange tabby wandered into the hotel. Case, who was having a drink at the hotel’s famous Blue Bar with actor John Barrymore, took pity on the bedraggled feline and gave it some milk in a champagne glass. He decided that the cat should become a permanent guest and named him Rusty because of his coloring. But Barrymore, who was playing Hamlet on Broadway at the time, felt the feline needed a more dignified name and changed it to Hamlet.

A tradition was born: The hotel has had a resident cat ever since. All the males have been named Hamlet in deference to Barrymore, and the females have been called Matilda, including the new incumbent. “She is really here for the guests and they absolutely love having a cat around,” de Almeida said.

De Almeida started her job as the hotel’s executive assistant five years ago. “When I was first told that I had to answer the cat’s e-mails, I thought they were joking,” she confessed. “On average, there are three to four a day from around the world, and I respond to them all. Guests often write to the cat when they get home as if they’re corresponding with a friend. They ask her to get them a reservation for a future visit, or simply to keep in touch.”

Now that the new Matilda is public knowledge, de Almeida is expecting a flurry of correspondence, not to mention increased activity on the cat’s Facebook page. She has had new business cards printed that say “Resident Feline.”

Matilda III is already very much at home. Within days of her arrival, she was hopping tables in the hotel lobby, greeting guests and allowing her photograph to be taken.

“She doesn’t have a set routine yet like Matilda II had,” said de Almeida, who has caught the cat taking elevator rides. “She has attended several private functions in the Oak Room and shows up without fail at morning staff meetings.

“Miraculously, like her predecessor, she doesn’t jump onto guests’ laps and climb onto the furniture. I don’t quite know how we got this right a second time around.”