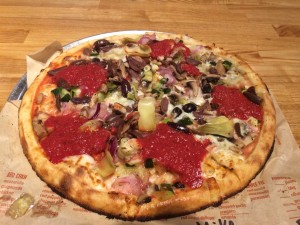 You may think twice about eating pizza from now on.
New hidden-camera video footage from Mercy For Animals, secretly recorded at Winchester Dairy outside of Roswell, New Mexico, shows workers viciously kicking and punching cows, stabbing them with screwdrivers, and violently whipping animals in their faces and bodies with chains and metal wires. The shocking video also shows “downer” cows who are too sick or injured to stand being dragged with a tractor while workers shock them in the genitals with electric prods.

Winchester Dairy supplies milk to Leprino Foods — the world’s largest maker of mozzarella cheese and a supplier to virtually all major pizza chains in the country, including Pizza Hut, Papa John’s, and Domino’s.

Mercy For Animals is calling on Leprino Foods to immediately adopt meaningful animal welfare guidelines, including zero tolerance for kicking, punching, and shocking cows; prohibition of painful and unnecessary mutilations of animals; provision of a safe, clean, and sanitary environment for cattle; and installation of video monitoring systems that live stream to the Internet to help deter abuse.

Following the undercover investigation, Mercy For Animals immediately alerted law enforcement authorities to the abuse documented at Winchester Dairy and presented them with meticulously compiled evidence of the violations of New Mexico law. Less than 24 hours after Mercy For Animals alerted authorities, the factory farm is believed to have suspended operations.

Mercy For Animals is urging the New Mexico Livestock Board and the Chaves County District Attorney’s Office to take immediate action in pursuing justice for these abused and exploited animals by prosecuting the workers and managers caught on video committing horrific acts of criminal animal abuse.

After reviewing the undercover video, world-renowned animal welfare expert Dr. Temple Grandin said that the acts of kicking and shocking cows, and hoisting them above the ground were “definitely abusive” and that the bellowing animals were in “severe distress.” She also stated that “anagement should be partially to blame for the abusive handling because they failed to provide both training and appropriate equipment for moving downer cows.”

“Cows exploited and abused for Leprino’s cheese are treated as mere milk-producing machines and endure lives filled with extreme misery and deprivation,” said Mercy For Animals’ president, Nathan Runkle. “No socially responsible corporation should support dairy factory farms that beat, kick, shock, and drag sick and injured animals. Due to its complete lack of meaningful animal welfare standards, Leprino Foods has allowed a culture of cruelty to flourish in its cheese supply chain.”