Pekingese Favored to be Top Dog at Westminster 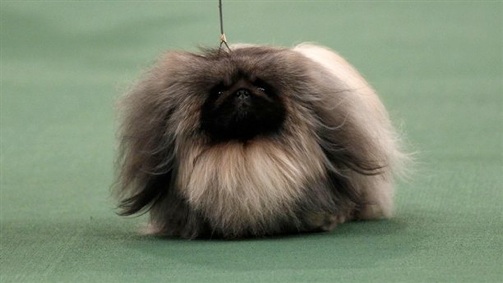 It’s the Year of the Dragon on the Lunar calendar, and this Chinese influence could extend to it also being the year of the Pekingese on the green carpet at the 136th Westminster Dog Show on Tuesday.

Johnny Avello, director of race and sports book operations at the Wynn Las Vegas and known in the Nevada gambling mecca as the Wizard of Odds, has this little dog with a breed history that dates back to the 8th century Tang Dynasty tipped to win the Best in Show title at 6 to 1.

Since 2007, Avello has posted the Westminster Dog Show odds on the sports book in Las Vegas, allowing dog lovers to have some fun determining which breed will win the most coveted title in dogdom. However, despite the popularity of determining who will take home the glory bone, the betting is purely for entertainment as no actual wagering takes place.

“Nevertheless dog lovers have a lot of fun with it,” said Avello, himself an avid dog lover. After all, it’s the most watched dog show in America.”

Avello is usually right on the money, so to speak. However, last year he had a terrier tipped to win at 8–1, but the Scottish Deerhound named Hickory bucked the 60-1 odds on him and took the top prize.

“When it comes to working out the odds, it’s all about instinct, intuition and networking,” Avello said. “There’s no doubt having a math background helps too. When I do my Oscar odds, I talk to Hollywood insiders and get what they’re thinking, and the same applies to other events like the Grammys and TV shows such as American Idol and The Apprentice.”

Avello’s “insider” for the Best in Show title is David Frei, communications director for the Westminster Kennel Club. He has hosted the live TV broadcast for more than two decades.

“Westminster is a show where professionals and amateurs can work along side one another in the show ring, and spectators can show their support for their favorite breeds from the ringside,” Frei said. “Now with the show on a sport book, they have the opportunity to have a vested interest at heart to see who wins.”

Six new breeds joined the Westminster lineup this year, bringing the number to 185 breeds and varieties, and Avello has worked out the odds on all of them. For the second consecutive year, the highest number of entries for one breed is the Rhodesian Ridgeback, with 40 contenders. Despite the large number of entrants, however, Avello has this breed ranked at 600-1 to win.

Relating to Avello’s breed listings for this year’s show, the dogs creating the most pre-Westminster buzz include a Pekingese named Malachy and a black cocker spaniel named Beckham. Avello has latter breed listed at 7-1. But it could be the reign of a terrier, with a little wired-haired fox terrier name Eira tipped at 8-1. And rounding out the top four breeds could have an affenpinscher named Joey winning.

London, the standard poodle that took top honors in the recent Eukanuba dog show in Florida, will also be competing in New York. The winning lineup of the Eukanuba show is often an indicator of what will happen at Westminster. Yet Avello has standard poodles listed at 20-1 to win at the Garden. Back in 2007, all eyes were on a Dandie Dinmont Terrier named Harry and owned by Bill Cosby to win that year. This year, the breed is listed at 1000-1.

As always, the outcome of this coveted show title win will depend on how all the dogs in the final Best in Show lineup perform in the ring on Tuesday. So who knows, it could once again be an underdog beating the odds.

ALSO ON THIS STORY