When NOT to Travel With Cats 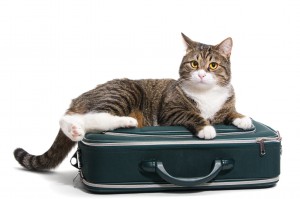 I was at the BlogPaws Conference in Las Vegas last weekend, an annual event that brings all the movers and shakers in the pet blogosphere together as well as people from the animal rescue community. Pets are as welcome as their people and there is a large contingent of pet attendees – dogs, cats, ferrets, and parrots, even a capybara.

Most are used to traveling with their pet parents and know the drill, which makes them very welcome. Of course there is always the odd neurotic barking dog.

This year, there was a woman wheeling around a cart with a carrier containing three three-week old kittens. It was a very large conference and a very busy one. This woman wheeled the kittens everywhere.

Apparently she had rescued them and was bottle-feeding them. The message I think she was probably trying to put out was: “Look at me. I am a cat rescuer. I am hand-rearing these orphaned kittens.”

However, this was not the message received by many people at the conference.  It raised the question instead: What bloody idiot takes three-week old kittens in a very VERY noisy environment and then takes them out for people to handle where there are other pets around, exposing their fragile immune systems to unfamiliar animals? The kittens were far too young to have had any shots.

Cats at the best of times are very susceptible to stress. A busy conference is definitely not the environment to show off kittens, which is exactly what she was doing.

When it comes to felines, it can be more difficult to pick up signs of stress because many felines often hide or sleep out of sight as a normal occurrence.  Sometimes the escalating level of feline stress is gradual. So it’s important to be vigilant of your feline at all times.

Here are some of the typical everyday activities can stress felines:

Signs of stress in cats can include hiding for long periods, excessive grooming and chasing the tail, loss of appetite, vomiting and diarrhea. Thus it’s important to check out anything that appears abnormal with your veterinarian.

Animal Behaviorists believe that garments such as the ThunderShirt  when worn by either cats or dogs can help reduce anxiety levels. The garment works on the principle mother’s use to swaddle and comfort babies and small children.

Calming collars, which are infused with natural calmatives such as lavender, are also stress relievers. So are pheromone sprays, which mimic the pheromones that both dogs and dogs give off naturally to ease anxiety in their young. Researchers also have discovered that cross-species pheromones work too. For example, androstenone a pheromone produced by the domestic pig during in courtship and social behaviors can have a positive effect on both dog and cat behavior. Such crossover calmatives are also available in spray form.

When it comes to dogs, daily exercise helps a lot as a stress reliever – as it does in people. Also try and establish a daily routine for your dog.  And, if you have to move, once you are settled, it’s important to establish that routine once more.

Because cats are such stoic creatures, it’s really important to ascertain the real cause of any stress and anxiety. Some cats simply don’t get a long with other cats in a multi-cat household and need to have their own space within the household to relax and feel at home. Illness and abuse can trigger stress too.

If you are planning to travel with your cats, think twice about taking them. They are often better off at home in their home environment with a reliable pet sitter.