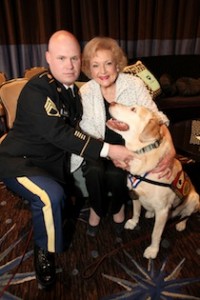 America has spoken and after more than one million votes cast by the public and a celebrity panel of dog lovers and experts, eight courageous canines have been chosen as the nation’s top dogs in their individual categories for the 2014 American Humane Association Hero Dog Awards™. Voting now opens for the final round that will determine which heroic hound will be named this year’s American Hero Dog at the fourth annual Hero Dog Awards, broadcast on Hallmark Channel this fall. The public is invited to submit one vote per day through September 15 at www.herodogawards.org.

Presented by the Lois Pope LIFE Foundation, the American Humane Association Hero Dog Awards seek to identify and recognize America’s Hero Dogs – ordinary dogs who do extraordinary things, whether it’s saving lives, lending sight or hearing to those in need, or just welcoming us home at the end of a hard day.

Each of the eight finalists and their handlers will be flown to Hollywood to take part in the Hero Dog Awards gala at The Beverly Hilton hotel on Saturday, September 27, to be broadcast on Hallmark Channel in the fall. There they will walk the red carpet, conduct VIP interviews, and attend the star-studded awards show and black-tie gala where the winning 2014 American Hero Dog will be chosen.

Arson Dogs category
Kai (San Antonio, TX) – The San Antonio Fire Department’s six-year-old black Lab was rescued from a shelter and given a second chance. Now she helps keep others safe by investigating arson cases. In her four-year career she has taken part in more than 200 investigations and helps educate children on fire safety. (Charity Partner: Project Paws Alive)

Emerging Hero Dogs category
Xena (Johns Creek, GA) – This pit bull was knocking on death’s door when she was brought into a Georgia shelter outside Atlanta. Emaciated and dehydrated, she was given just a one percent chance at survival. Unbelievably, she defied the odds, made a full recovery and was adopted by a family with a little boy with autism. Before, the child had closed himself off to the world, but the arrival of Xena sparked something in the child, and now he went from once silent to constantly singing to and chatting with Xena the Warrior Puppy (Charity Partner: Sheltie Rescue of Utah).

Guide/Hearing Dogs category
XXon (Bloomfield, CT) – In January 2010, an explosion in Kandahar, Afghanistan left Air Force Sergeant Michael Malarsie blind and killed four of his fellow servicemen, including his best friend. Though he lost his sight, Sgt. Malarsie was soon partnered with XXon, and they became the only active duty guide dog team in the Air Force. Now retired, Sgt. Malarsie continues to work with XXon every day as the dog helps get him safely to wherever he needs to be. (Charity Partner: Fidelco).

Law Enforcement Dogs category
Kota (Winchester, VA) – A member of the Winchester, Virginia police force, this dog was injured by an eight-foot fall while responding to a burglary in progress. Undeterred, he helped his fellow officers finish the call, fighting with a severely fractured limb to ensure their safety. (Charity Partner: K9s4COPs)

Military Dogs category
Chaney (Waverly, IA) — This eight-year-old lab retired from the Marines in 2013 after multiple tours in Iraq and Afghanistan as an IED detection dog. While deployed, Chaney not only saved countless lives by locating IEDs, he also served as a great morale booster for everyone in his squad. Since retiring, Chaney was adopted by one of his handlers and they now spend many hours volunteering around the Midwest for a nonprofit organization called Retrieving Freedom, Inc., which trains service dogs for disabled veterans and children with autism. (Charity Partner: America’s VetDogs)

Search and Rescue Dogs category
Bretagne (Cypress, TX) – Over her long career, Bretagne has made a significant contribution to the search and rescue community through her many deployments including the World Trade Center after 9/11, the 2002 Olympic Winter Games, and Hurricane Rita in 2005. She now continues as an ambassador for search and rescue dogs as she visits elementary schools where she helps first graders learn to read. (Charity Partner: Penn Vet Working Dog Center)

Service Dogs category
JJ Krawczyk (Apex, NC) – Once a shelter dog, this small hero was rescued, trained, and partnered with a young girl suffering from a rare condition known as Mastocytosis, which can cause severe reactions for her. This dog with the gifted nose can detect when reactions are about to occur, alerting the girl’s parents that her life might be in danger. When she needed surgery recently, doctors requested the dog be present in the operating room to help keep the girl alive. (Charity Partner: Eyes Ears Nose & Paws)

Therapy Dogs category
Susie (High Point, NC) – A puppy that was set on fire and a woman who suffered a brutal dog attack became a dedicated team that eventually changed North Carolina animal-cruelty laws. Susie the Pit Bull mix began life with terror and pain when she was beaten, burned, and abandoned. Susie and her owner both triumphed over pain and fear to become voices for abused animals who have no voice. They visit hospitals, schools, and nursing homes to inspire people never to give up. (Charity: Paws & Effect)

“This year’s slate of hero dogs represents the best of our ‘best friends,'” said Dr. Robin Ganzert, president and CEO of American Humane Association. “Their remarkable stories of valor deserve recognition at the highest level and we are privileged to honor their accomplishments once a year in this national forum.”

“Each and every one of these courageous canines is a winner,” said philanthropist and presenting sponsor of the Hero Dog Awards Lois Pope. “It will be my honor to shake each dog’s paw at the gala event in Hollywood this fall.”