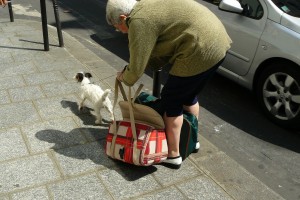 Picture this.
You are taking your dog for a typical neighborhood walk. All of a sudden, you trip over some uneven concrete on the pavement and fall flat on your face, twisting your ankle and remain lying there.

Your dog instantly comes over to you and starts whimpering. In your pain, you glance up and he starts licking you. Could that possibly be a look of “canine concern” on his face? Further, he remains by your side until you are able to get up and get moving again.

Once back home, you share this incident with family and friends and outline how your pooch showed sympathy and provided such wonderful comfort until you were back on your feet.

So here’s the big question.
Did your dog really understand what had just happened on the walk and does he really care?

“Yes,” says Professor Nicholas Dodman, www.ThePetDocs.com head of the small animal behavior clinic at Tufts Veterinary School of Medicine in Grafton, Massachusetts and author of the bestseller book The Dog Who Loved Too Much.

“Over the years, studies have been done that show dogs have emotions such as anger and anxiety and even jealousy. I believe that dogs are also very capable of showing an emotion such as love and affection and that there is such a thing as real canine empathic response to distress in humans. The dictionary definition defines empathy as ‘the ability to understand and share the feelings of another’.”

Now a new study published last month (June) by scientists Dr. Deborah Custance and Jennifer Mayer of the Department of Psychology at Goldsmiths University of London endorses Dodman’s viewpoint and further reveals that not only do dogs show empathy for their loved ones, but can be empathic towards strangers too.

In the Custance-Mayer experiment, 18 pet dogs of different ages and breeds were put in the room together with their owners and some strangers. They were subsequently exposed to four separate 20-second experimental conditions in which either the dog’s owner or an unfamiliar person pretended to cry, hummed in an odd manner, or carried out a casual conversation.

In response, the dogs demonstrated behaviors consistent with an expression of empathic concern. Significantly more dogs looked at, approached and touched the humans as they were crying as opposed to humming, and no dogs responded during talking. The majority of dogs in the study responded to the crying person in a submissive manner consistent with empathic concern and comfort offering.

“The humming was designed to be a relatively novel behavior, which might be likely to pique the dogs’ curiosity. The fact that the dogs differentiated between crying and humming indicates that their response to crying was not purely driven by curiosity. In fact, the crying carried greater emotional meaning for the dogs and provoked a stronger overall response than humming or talking,”  explained Custance.

“If the dogs’ approaches during the crying condition were motivated by self-oriented comfort-seeking, they would be more likely to approach their usual source of comfort, their owner, rather than the stranger,” added Mayer. “No such preference was found. The dogs approached whoever was crying regardless of their identity. Thus they were responding to the person’s emotion, not their own needs, which is suggestive of empathic-like comfort-offering behavior.”

“Simply put, Morgan’s Canon says pet lovers tend to anthropomorphize animals,” explains Dodman. “So in the context of taking your dog for a walk and falling, twisting your ankle and remaining laying there in pain, Morgan’s explanation would be that as the dog’s owner, you are his leader, and suddenly you are incapacitated and you are not going anywhere. So the dog is confused and whines and cries for himself,” outlines Dodman.

“Further he isn’t “feeling the pain” at all; instead somehow in the past the dog has been rewarded for responding in this fashion. Perhaps something similar happened in the past; say the owner fell off a ladder and the dog had come up close and the owner had petted him. From the dog’s perspective, the owner is now lying on the floor again and the dog thinking last time he was on the floor I got petted and a treat for being good. So I will do it again. Thus his actions are not a cogitative response but a learned response triggered by what is called emotional contagion – that the dog gets involved without being cognitively aware of the person’s state.”

Aligned with the Goldsmiths University of London study, Dodman further believes that loving, caring owners really do understand their dogs.

“If an owner says ‘my dog seems very anxious’, they are right,” says Dodman. “And if they say ‘my dog can’t stand to be separated from me and shows the human condition of separation anxiety,’ they are right too.”

“For example, if a dog is being aggressive, an owner will sometimes interpret this as the dog is being mean or angry with them. But behaviorists know that a lot of aggression towards an owner is really produced by a lack of trust and it results in a conflict in the dog’s mind, as he doesn’t fully understand what the person is doing.

“From the dog’s standpoint he thinking ‘my owner is a perfectly fine owner for 98 per cent of the time. Then suddenly he goes completely ape and is yelling at me and I don’t understand it and I growl back’.”

When it comes to man and his canine best friend, it’s all about nurturing and building a trusting relationship. After all, that’s the very definition of the human-animal bond. Now this new study gives this bond a four-paws-up stamp of approval and further endorses the important role dogs can play in our lives.