What A Difference A Dog Makes 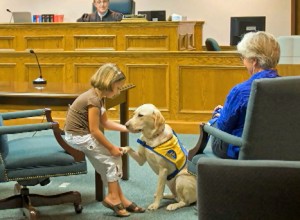 If you happen to walk down a main hallway in the Kings County Courthouse in downtown Seattle, the chances are you will encounter a very laidback Labrador relaxing on her back, her legs splayed, stopping the foot traffic and soliciting belly rubs from whomever passes by. Not only is the dog’s demeanor allowed and legal, given the unusual surrounds, the justice department encourages it. And there are no holds barred on the amount of pats the dog gets in a day.

Her name is Ellie, or Miss Ellie according to the sign on the office she shares with deputy prosecuting attorney Page Ulrey. Ellie is a courthouse facility dog, one of 34 working in 17 states. Her job is to assist crime victims and witnesses and help them deal with very stressful situations.

“ Generally when people are in a courthouse, they are very stressed, bracing themselves for what is ahead,” explains Ulrey. “Not only are such situations always unpleasant but they can be very scary too.”

Ellie’s “specialty” is children involved in physical or sexual abuse cases, or where a child is in court as a witness to some horrific incident. She also works with the elderly, particularly, those who are disabled. Her job is simply to be there for them and lend a paw.

“The effect she has on people is simply amazing,” says Ulrey. “ I will bring Ellie in and tell the child or person concerned that it is their job to take care of her, to watch her tail movements and her paws. Thus she gives them something really positive to focus on. Once given such a responsibility, they don’t feel so powerless in a situation where otherwise they have so little control. Ellie gives them a sense of dignity in what often is a humiliating process.”

Recently Ulrey brought Ellie in to court to assist an adult disabled man who had been victimized and was absolutely terrified to be before a judge.

It was a jury trial and the defense attorney objected to her presence. Then in a groundbreaking decision, the Washington State Court of Appeals ruled at the end of last month (August 27) that the dog was allowed to be in court alongside the victim as he testified and that in no way did Ellie’s presence prevent the accused of having a fair trial.

“This was a big victory, and also gave acceptance that dogs do make a difference,” says Ulrey.

Those who get a dose of doggie love in a courthouse have Ellen O’Neill-Stephens, a formed deputy prosecuting attorney to thank. In 2003, O’Neill-Stephens pioneered the use of dogs to provide emotional support in the criminal justice system and founded an organization called Courthouse Dogs.

Her inspiration was her son Sean Stephens who has cerebral palsy and cannot walk, speak, or use his hands, and, his late service dog, Jeeter who had been trained by Canine Companions for Independence. Initially O’Neill-Stephens started bringing Jeeter to work with her one day a day week and soon witnessed the benefits of having a dog around the courthouse.

“The use of courthouse dogs changes the way we meet the emotional needs of all involved in the criminal justice system,” says O’Neill-Stephens. “A dog’s calming presence creates a more humane and efficient system that enables judges, lawyers, and staff to accomplish their work in a more positive and constructive manner.”

Courthouse dogs are treated as professional staff members in the courthouse environment. When working, they are expected to be “on duty”, which means their behavior must be predictable and controllable. A dog is expected to hold a sit or down position for long periods. They are not allowed to vocalize except when told to do so, must obey commands immediately, and have to be rock solid when faced with the most difficult of circumstances.

“For example,’ explains O’Neill-Stephens, “if law enforcement action is needed in the courtroom, the courthouse dog is required to stay motionless, never moving to bark or try to protect his handler. Any such behavior on the dog’s part could result in a mistrial and cost the jurisdiction thousands of dollars.”

However, like her counterparts in other parts of the country, when she’s not working, or soliciting belly rubs, Ellie has a huge box of doggie toys in her office to keep her occupied. And, according Ulrey, when she leaves work, she instantly becomes a typical dog.

“She’s a very loveable companion with an extraordinary soul and a huge personality.”

Occasionally Ellie gets to hang out with some of her courthouse facility dog friends and Ulrey has a close relationship with a breeder who raises puppies for Canine Companions for Independence, which is headquartered in Santa Rosa, California.

The idea of having courthouse dogs has spread to other countries and there are dogs in Canada as well as in Santiago, Chile.

A courthouse facility dog sheds new light on the human-animal bond at work. And, as criminal justice departments around the country brush up on their knowledge of man’s best friend, they are gaining a better understanding of what a difference a dog makes.

You can learn more about courthouse facility dogs and how to implement them in cities around the country at www.Courthousedogs.org