Recently, I have been seeking out and reviewing unique products that have exceptional and equal benefits for both pets and pet parents. The emphasis has been on making pet care easier in a variety of ways for the pet parent and at the same time highlighting special benefits for fur kids.

The Breeze Litter System is not new. But it caught my attention at a recent trade show where the manufacturer, Purina, revealed a new XL-sized box. This addition to the box line-up really piqued interest because of its spacious interior and it has really high sides, offered excellent privacy while allowing cats a 360-degree view to ensure no-one is approaching with any intentions to ambush. Plus, it has a spacious low entry point. Apart from the new XL, there are to other litter box designs namely a smaller open box, and, a hooded version.

THE PROBLEM: WHEN LITTER GETS STUCK BETWEEN THE TOES OR DRIES ON FUR…

What prompted a closer look and a request to actually test it was the fact that Ziggy, like many long-haired cats, regularly gets litter caught between his toes and if he accidently steps badly in the box, it will cover a foot. Next minute, he’s trying to deal with the issue by washing furiously and ingesting kitty litter in the process! My response has been to get wet paper towels to clean him, and, worst-case scenario (for him) I’ve put his foot in warm water in order to remove and freshen the fur. And it goes without saying that when a cat steps in wet litter and it sticks, it also gets tracked everywhere…

While I don’t mind cleaning up after my pets, the sticky wet litter was really becoming an issue for Ziggy.

HOW THE BREEZE LIUTTER SYSTEM WORKS
The litter is in odorless pellet form and the system is designed to separate liquids and solids the moment the cat enters the box. When a cat pees, the liquid runs through the pellets, through a grate along the bottom of the litter tray directly onto a very absorbent pad that holds the liquid preventing, it from seeping anywhere and smelling. Think baby diaper or puppy pee pad…

When they poop, the solid waste sits on top of the pellets until it is removed. Or, the cat may try and bury it (old habits die hard) but nevertheless it’s easy to remove with a specially designed scoop that allows any pellets not stuck to the litter to fall back into the box. No mess. No Fuss.

The pee pads are on a special sliding drawer underneath the box and the pads are easy to remove and replace. Further, you can swing the tray around to ensure that the entire area of the pad beneath the grated bottom of the box is utilized. There are two kinds of pads available, one that needs to be changed every three days and a multi-cat version that can be changed weekly without releasing any odors into the room.

GAME-CHANGER
I’m going to get straight to the point; it instantly solved the problem of Ziggy having messy paws and the necessity for me to be constantly washing his feet. This task of removing trapped litter from between his toes and dried litter from his long fur was time-consuming. And, this daily ritual was stressful for the both of us.

THE TRANSITION
In general, a change from one type of litter to another needs to occur slowly over a week of more. But transitioning to a new litter system completely is a different story. The product comes with an excellent “how to” booklet plus, there is a help line for additional advice.

The idea is to place the new Breeze box in the place of your original box and place the current litter box alongside it with a few pellets in the old box so they begin to get the feel of the pellets under paw. The recommendation is to not clean the old box.  This step is key to a major transition because cats like a clean toilet and this draws their attention to the new clean box.

As a pet parent, let me also say that such a transition takes a lot of patience especially if you are dealing with multiple cats, each with very different temperaments and personalities. It was no breeze … With Ziggy and Tory, it took me nearly three weeks.

I placed the new box in the spot where the old one stood and moved the old box alongside it. Initially, they would get in the new box, sniff around, and then jump out and head right next door to the old one … Then, after a few days, they peed in the Breeze but continued to get back to their old pooping ground. After more than a week, the complete transition wasn’t happening. I succumbed, cleaned the old box and called the help line for help…

Their Plan B was a game changer. I was told to clean out their old box, fill it with some fresh sand and add a few scoops of the pellets to this box and to continue to add pellets to the box daily until there was 30 per cent old litter and 70 per cent Breeze pellets. I continued to scoop the old box as I reduced the old litter this way too. Purina suggested a ¼ cup of pellets daily but I increased this amount gauging their reactions. But they continued jumping between the boxes…. Next, I moved the old box a little further away from the Breeze box.

The transition was definitely exacerbated by the fact Ziggy and Tory have very different personalities. They had to investigate, discover and, ultimately use, at their own pace.

Then, as we were approaching week two, there was poop in the Breeze box. It was like discovering gold nuggets on the sidewalk …  Another few days, and there were two poops in the box indicating both cats had tried it. That was the day I removed the old box completely.

**I must add here that while the rule is one litter box per cat in a household plus an extra one, my cats have always insisted on sharing litter boxes. So, if you have more than one box in the house, this transition rigmarole has to take place at every litter station.

Needless to say, when the old litter box disappeared, I got some very puzzled looks and they actually went around looking for it! Ultimately, when the search proved fruitless, they returned to the Breeze XL box and have used it ever since.

No more litter stuck to Ziggy’s feet and fur. No more stressful paw washing. No more litter tracked all over the house and additional house cleaning. Scooping poop is easy. No bags of clumped litter in the trash. And no more lugging heavy jugs and bags of litter. The pellets come in 3.5 lb. and 7 lb. bags. Maintaining this litter box is, in fact, a breeze.It was indeed a problem solver.

For these reasons, this product gets the Must Have Stamp of Approval.

To learn more about another product with great benefits for both pet parents and pets, check this link:https://legacy.sandyrobinsonline.com/2020/07/barkbath-dual-use-portable-dog-bath-deep-cleaning-system/

The litter kit was provided by Purina for this review. 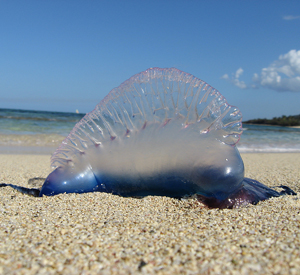 If you take your dog regularly to the beach, be sure you have something to treat jellyfish stings – just in case.

HOW TO TREAT A JELLYFISH STING

Alternate cold and heat – Cold compresses (ice wrapped in a cold, wet washcloth) help numb the sting and reduce swelling. Apply them for 10 – 30 minutes. Then, alternate with a towel covered hot compress, 5 minutes on and 5 minutes off until it cools, to bring healing blood back into the area and flush out the poison. Alternate cold and hot packs for 20 minutes.

The Must Have Stamp of Approval is based on my personal opinion and the test experiences of the Reigning Cats and Dogs product testers as well as my personal knowledge of the product category. The Must Have Stamp of Approval is designed to advise pet parents on products that will in some way improve their pet’s health and well being, or, their own experiences as a pet parent. Manufacturers are welcome to submit information and samples of new and innovative products for testing. The product testing team consists of dogs and cats of different temperaments and activity levels etc in an attempt to cover a lot of bases and produce worthwhile reviews. The team loves what they do and get to keep the products so they can show off to their friends and further spread the word.