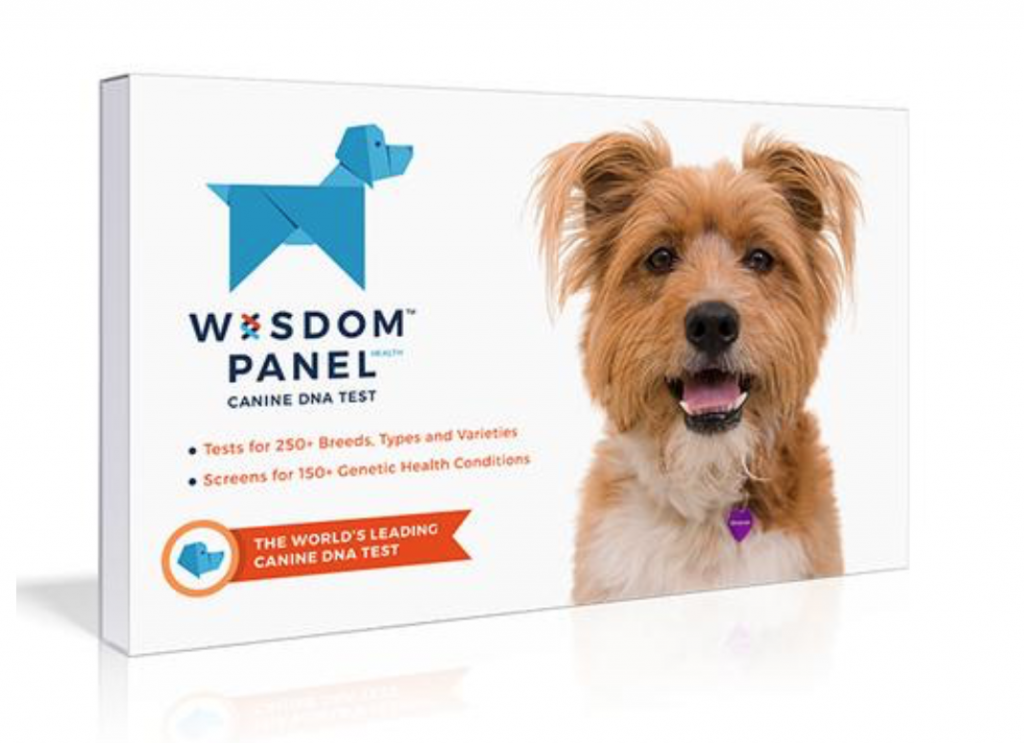 Meet Riley.(Below) She is the newest member of our family and the only canine is our very feline world.  Her history is sketchy. We know she is from Louisiana where she was saved from a high-kill shelter and flown to San Diego in the hope of finding her forever home. She is guestimated to be about two years old and to have given birth to a litter of puppies.

She was in the San Diego shelter for about a month before my son Evan walked in and fell in love with her and adopted her.

Apart from being very grateful to him, demonstrated with lots of tail-wagging and licking and genuine adoration of him, it was obvious from the get-go that she liked cats as Evan’s housemate has a tabby. A trip to the vet showed that she was healthy. And that was it. We knew little about her breed make-up and canine doggy traits. 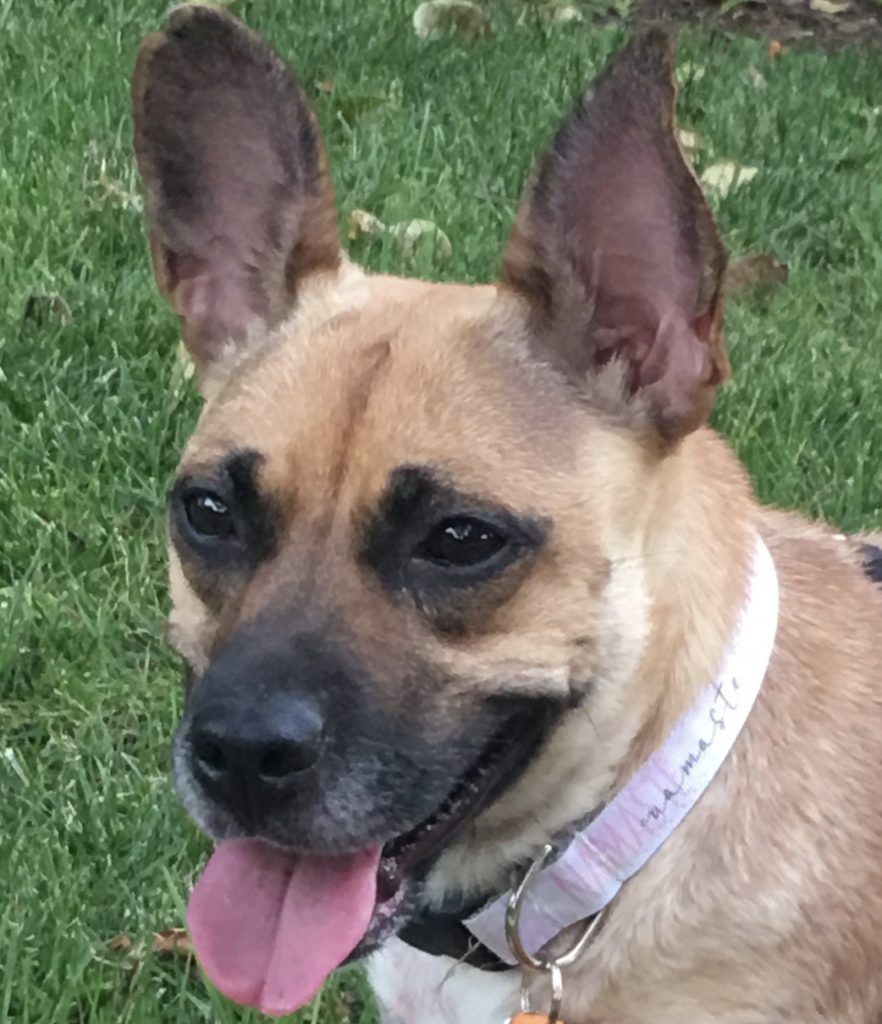 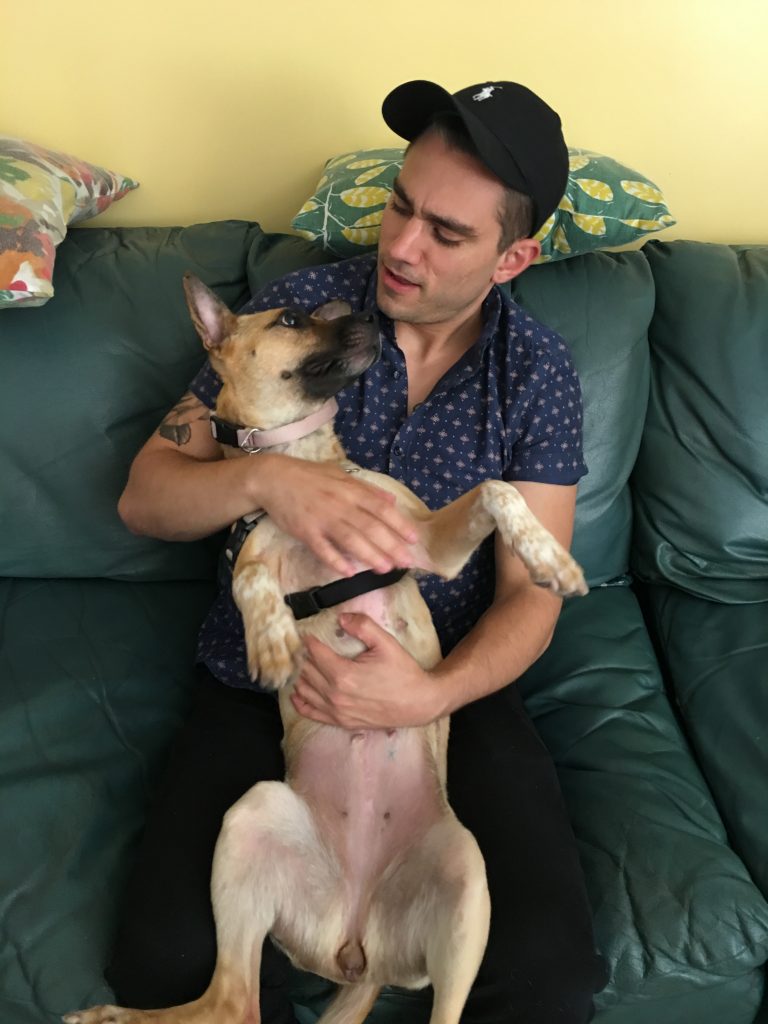 Fortuitously, at the time of her adoption, Mars Petcare published a landmark study conducted by Wisdom Health known for their doggie DNA kits and Genoscoper Laboratories that highlighted how genetic testing for dogs can help identify diseases and enable preventive care for better health. The idea that a DNA test would reveal her genetic doggie make-up was very appealing too.The kit tests for 250 dog breeds.

Mars Pet Care offered to send a kit. Swabbing her cheeks took a few seconds and then it was a matter of putting the sample in a specially prepared pouch, registering it on line and putting it in the mail.

But before the big Riley reveal, a bit about this interesting study called the “Frequency and distribution of 152 genetic disease variants in over 100,000 mixed breed and purebred dogs”, published in PLOS Genetics. This research is the first to show the genetic diseases mixed breed dogs are most likely to develop. The study also shows that fewer mixed breed dogs than purebreds are affected by the most common disease-causing mutations tested in the study. Knowing a dog’s disease- related genetic make-up could enable owners, breeders, and veterinarians to make more informed decisions about a dog’s health. The research was based on genetic testing technology that can be used at home – just like the kit we used on Riley.

“There has been a long-standing perception that mixed breed dogs are less disease-prone than purebred dogs. This DNA-testing-based evidence shows that while mixed breed dogs are in fact less likely than purebreds to develop the recessive disorders evaluated in the study, they may still be carriers. Importantly it’s now clear that all dogs can benefit from genetic testing,” said Cindy Cole DVM, PhD, DACVCP, General Manager at Wisdom Health. “It’s exciting that new diagnostic tools are now available to veterinarians, breeders and owners alike to enable them to make more informed decisions about overall care for dogs.”

Testing is key to understanding if a dog will be at risk of developing a genetic disease. Based on the 152 diseases tested the results showed —

“For owners, understanding for which genetic diseases their dog is at risk can help them and their veterinarians design a personalized care and wellness program for their dog,” said Jonas Donner, PhD, Chief Scientific Officer at Genoscoper. “More broadly, for veterinarians to understand which disorders are common across the overall population is extremely valuable information for the future of proactive medical care. Using genetic tools to further disease monitoring and eradication in different populations, can, over time have a positive effect on both purebred and mixed breed dogs.” 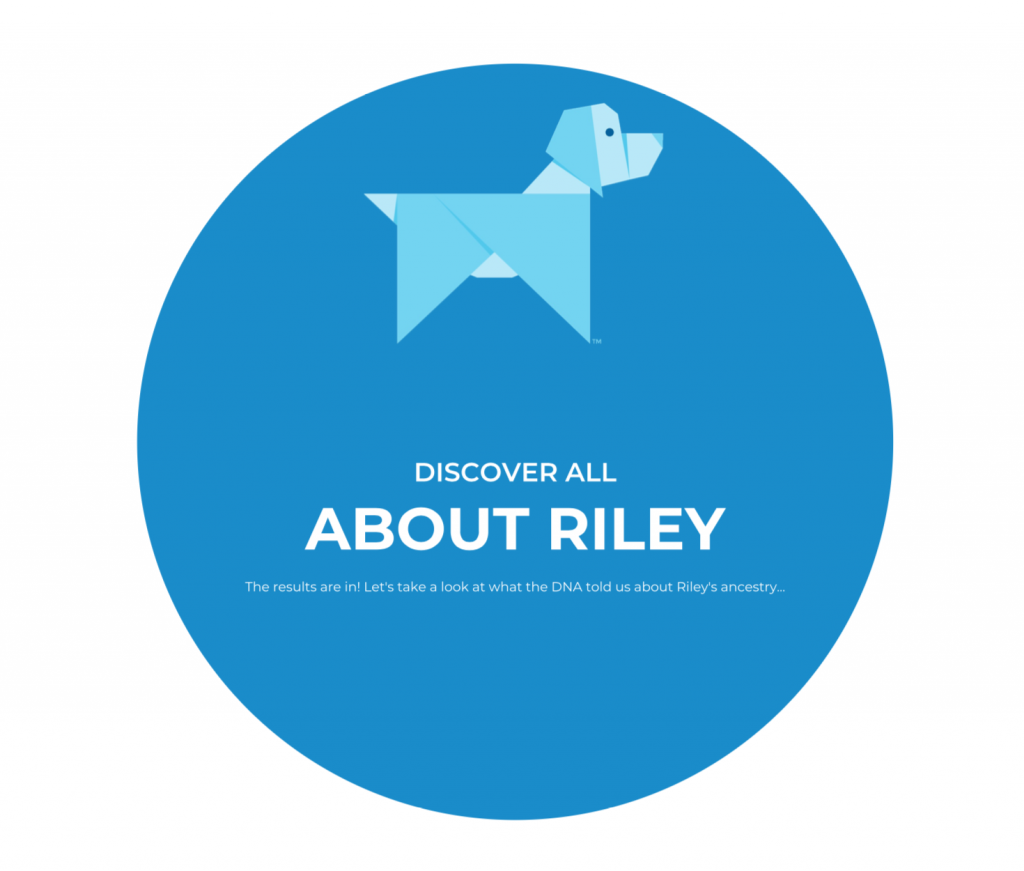 It took about three weeks to get Riley’s results and we were certainly in for a surprise. Her genetic make-up revealed that she was 62.5 % American Staffordshire Terrier, 12 % Shih Tzu and the remaining 25 % of her make-up was listed as from terrier, sporting herding and hound groups.

“Currently we can only go back three generations,” explained Angela Hughes, a spokesperson for Wisdom Health. She further added that it’s possible to delve further back; The problem is computers haven’t caught up with genealogy research yet!”

But they eventually will when the IT people get there and they will be able to fill in the remaining gaps in a dog’s profile. 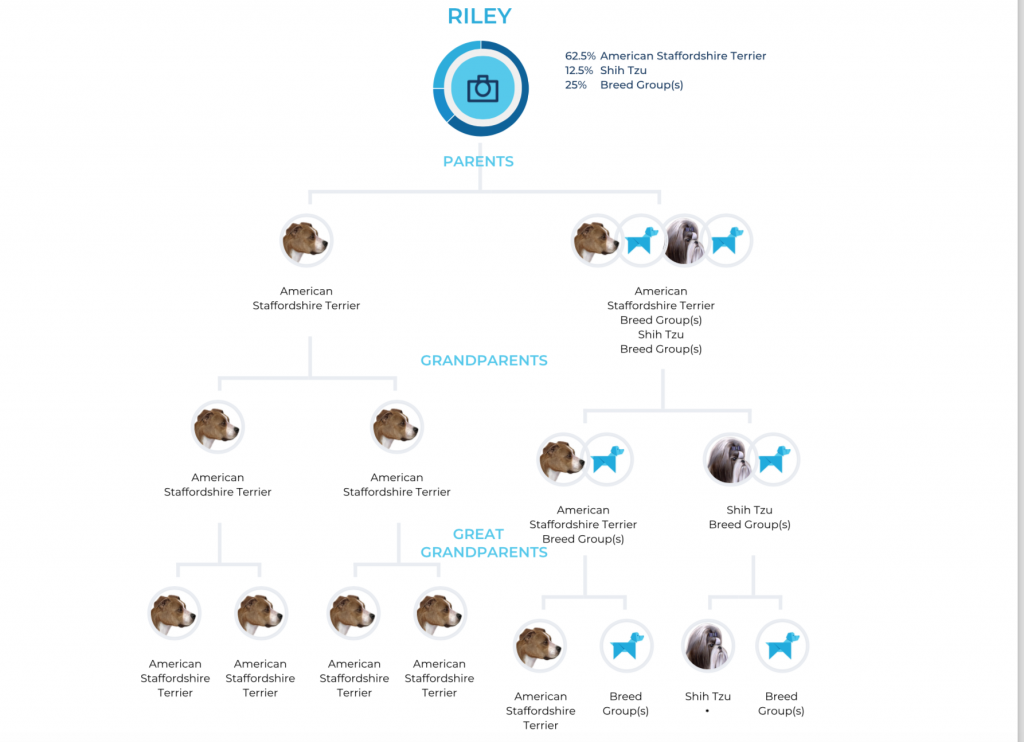 Knowing her American Staffordshire Terrier and Shih Tzu backgrounds were amazingly helpful in now researching both those breeds and thus identifying her personality traits.  And yes, she loves cats; it’s in her genes …She’s very busy (terrier trait),  climb on laps (Shih Tzu ?)and, likes to herd us around … ( as yet  the unknown herding trait in her profile…) 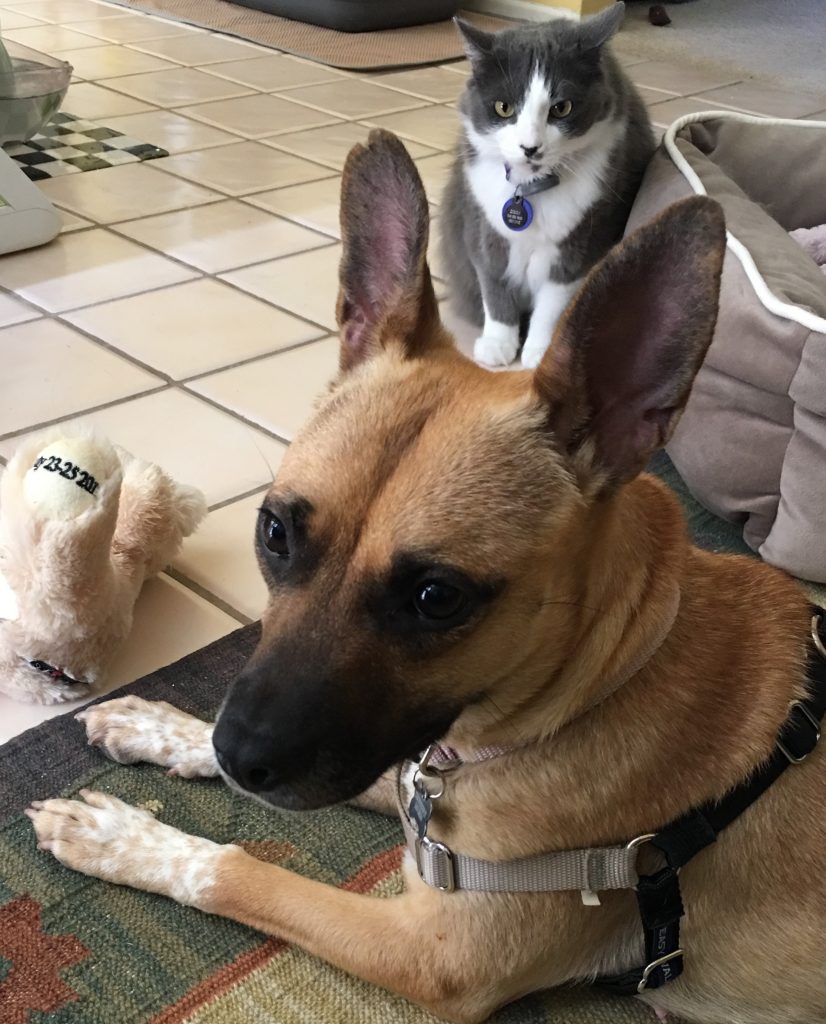 Further from a health perspective, she came up clear on all the 152 diseases and variants she was tested for. We immediately sent off this info to her vet to keep on file.

Ultimately the better you can  know and understand any fur kid, the better the opportunity a pet parent has of giving their pet the best life ever. It definitely enhances that wonderful human-animal bond. Consequently, the Wisdom Health DNA kit is a must-have and hence gets the Must Have Stamp of Approval.

The Must Have Stamp of Approval is based on my personal opinion and the test experiences of the Reigning Cats and Dogs product testers as well as my personal knowledge of the product category. The Must Have Stamp of Approval is designed to advise pet parents on products that will in some way improve their pet’s health and well being, or, their own experiences as a pet parent. Manufacturers are welcome to submit information and samples of new and innovative products for testing. The product testing team consists of dogs and cats of different temperaments and activity levels etc in an attempt to cover a lot of bases and produce worthwhile reviews. The team loves what they do and get to keep the products so they can show off to their friends and further spread the word.