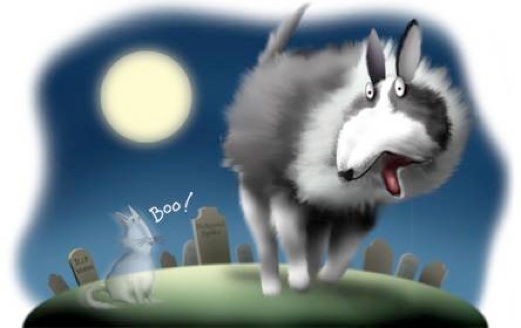 The pumpkins, tombstones, skeletons and witches that adorn houses and front lawns this time of year mean that it’s almost Halloween. For many, it’s also a time to recap stories about ghosts and visit famous haunted places. Some of the country’s most legendary haunted locations are said to be visited by ghosts of dogs and cats — even horses — and draw a regular stream of ghost seekers this time of year.

“Haunted places that feature pets rank amongst the most popular spots,” says Sue Darroch director and co-founder of PSICAN, Paranormal Studies and InvestigationsCanada and The Toronto Ghosts and Hauntings Research Society. “Ghost seekers seem to derive comfort from knowing that pets seemingly live on after death. There isn’t the same fear factor often attributed to human ghost encounters.”

Like their human counterparts, ghostly pets appear to haunt where they lived and played. Sightings from around the world include everything from royal palaces and stately mansions to ordinary homes. In this country, many popular tourist places claim to have ghost pets.

Author Dusty Rainbolt of Lewisville, Texas never believed in apparitions and considered those who did as having had “one too many mind-altering experiences in the 1960’s” until she had her own ghostly experience with one of her own cats named Maynard.

About a month after Maynard passed away, Rainbolt was in bed when she felt something jump up on to the covers, pad across the bed and eventually settle down at her feet.

“I could feel the pressure,” recalls Rainbolt. “It was truly haunting but not in a bad sense. I was away from home when he died and I think he came back to say goodbye.”

Rainbolt says that all the feline ghosts that appear in hotels and public places across the country are very friendly except for the Demon Cat that haunts the Capitol Building in Washington, D.C.

“It is said to hang around the catafalque, the raised ceremonial platform on which a dead president’s casket rests when the body lies in state in the Rotunda. During my research, I came across numerous stories of the cat attacking guards who have patrolled the basement of the building over the years.”

For anyone interested in testing their ghost-busting skills on Halloween, here are several places across the U.S. said to be haunted by pets.

Dozens of hotels around the country have ghost cats. Some of the more famous ones include The Crescent Hotel in Eureka Springs, Ark., where an orange tabby named Morris (because he looked similar to the spokes cat for the 9 Lives Cat Food) lived in the ’70s and ’80s. Morris used to greet guests from his favorite chair in the lobby. When he died, the hotel staff buried him in the hotel’s rose garden, but visitors over the years say he still sits in his favorite chair from time to time and has also been seen wandering around the rose garden.

Room number three in the Tokeland Hotel in the seaside resort of Tokeland, Wash., also has a ghost cat occupant. Over the years, guests have often reported seeing a cat in this room, but the hotel’s management claims that no feline is officially “registered”. In San Antonio, Texas, visitors to the Marriott Plaza San Antonio Hotelclaim to have seen a woman wearing a white dress strolling through the upper levels of the hotel with a cat in her arms.

The Los Angeles Pet Cemetery — also known as L.A. Pet Memorial Park — on Old ScandiaLane in Calabasas, Calif., is the final resting place for many of Hollywood’s famous animal actors including cowboy hero Hopalong Cassidy’s horse Topper and Petey the pitbull who starred in the movie Little Rascals. But it’s silent movie star Rudolph Valentino’s Great Dane named Kabar who is said to still walk through this hillside cemetery and playfully lick people who stop at his grave around Halloween.

The Whaley House Museum on San Diego Avenue in Old Town San Diego, Calif. is listed by the United States Department of Commerce as “an authentic haunted house”. In fact, the Travel Channel’s America’s Most Haunted, claims it to be the number one most haunted house in the country. This classic example of mid-19th century Greek revival architecture was once the home of entrepreneur Thomas Whaley who came to California during the gold rush. Whaley’s infant son Thomas Jr. died in an upstairs bedroom and visitors have reported hearing the cries of a baby coming from this room. The ghost of a small dog has also been seen coming and going from this bedroom, as well as outside the house in the yard.

Over the years, visitors and Civil War reenactors at Gettysburg National Military Parkin Pennsylvania claim to have seen ghosts of soldiers on horseback and the Old National Cemetery is a popular place to stop by around Halloween.

Other battlegrounds around the country also share this reputation. Ghost seekers claim that Fort McAllister near Savannah, Ga., is haunted by all kinds of animals, including cats and dogs that were mascots belonging to soldiers. The most famous pet was Tom Cat, a brave feline who lived with confederate soldiers and was killed during a particularly fierce battle. There’s a plaque at the site to honor him which is particularly popular with tourists.

Many, including Rainbolt, believe that Tom Cat only used up eight of his nine lives because he still roams around there appearing to visitors in ghostly form. Some ghost seekers are taking bets as to whether he will make an appearance again this Halloween.

Sandy Robins is an award-winning pet lifestyle writer. Her work appears in many national and international publications and she also hosts the Pets on the Go radio segment on Pet Talk with Harrison Forbes on 97.1 Free FM radio, Los Angeles.