The True Nature of Cats 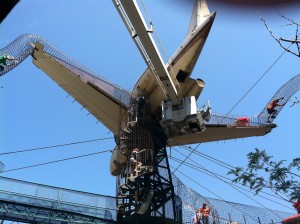 Recently the Purina PetCare Company took a team of experts that included veterinarians, behaviorists and nutritionists to South Africa to study the African Wildcat in its current natural habitat as this species is believed to be an ancestor of our domestic kitties dating back 10 000 years. The goal was to learn what motivates their behavior and draw parallels with our feline companions to help cat parents recreate some of those natural traits in a domestic setting in order to improve cats’ lives. Sandy Robins was one of a small clowder of feline media influencers chosen to work with the team on this voyage of discovery.

St. Louis, Missouri. The Gateway Arch glints in the early morning sun and the Mississippi River looks still and lazy, devoid of water traffic. We are in a black SUV with tinted windows. Our driver looks like he’s stepped out of the Men in Black movie. He’s skilful at swiftly negotiating traffic and choosing side streets and finally comes to a halt in front of unmarked door in a plain-faced brick building.

We are at the City Museum, an eclectic mix of recycled and repurposed materials, a sculptural and architectural jungle of metal and concrete linked with swinging rope walkways, giant slinkys with below ground hideouts and look-out posts that are the rusted remains of discarded aircraft that look suspended in the sky. The destination has been carefully selected with thought and purpose, in the same way a cat in the wild would pick a location to hide obscured from sight, to look down on its surrounds to survey and observe.

We are here on a journey to discover the true nature of cats and this is our “wild” habitat for the day. We are going to be allowed to climb and crawl, jump and leap (for the sure-footed who remembered their Reeboks) and observe. We are going to explore and play and pretend we are members of the felis silvestris lybica family, our own cats’ original ancestors. Today we are going to try and think like cats and learn why domestic felines do what they do and, how this reflects feline life in the wild. We are here to listen and learn about what the experts observed in South Africa and discuss how cat lovers can introduce similar concepts and ideas into their homes so that we can ultimately bring out the true nature of our cats and, in so doing, enrich their lives and wellbeing.

“Seeing the cats in the wildlife setting was fascinating,” explained behaviorist Sandra Lin. “I am now observing cats in a different way and seeing how our domestic cats still display many natural traits even if they’re in a more structured environment like a typical home.”

Many cat owners are unaware that a lot of of the behaviors our cats display whether they are living a high-rise apartment building in New York or in a condo in California have direct bearing on their true nature in the wild. And, by acknowledging this and giving them modern “tools” such as toys, cat furniture and other accessories, we can allow them to be their true selves and thus improve their wellbeing and our relationships with them too.

“We expect our cat’s to align with our schedules, which usually involved a hurried start to the day,” explained Lin.

So let’s explore some comparisons.

At dawn, the African Wildcat is awake and already on the prowl for his first meal of the day. And yet, when our own cat’s wake is up in the morning with a purr or a prod or a very insistent meow, we don’t recognize the fact that this is what they would be doing in the wild. In a domestic setting, they are unable to go and get breakfast themselves, they are relying on us as their caregivers to go to the kitchen and produce the first meal of the day.

Thus serving your cat her first meal is a wonderful way to spend quality time together, even in the time span you have is relatively short. We can also recreate the hunt by playing games over a cup of coffee. It’s easy to multi-task by drink and simultaneously playing with a laser toy for a few minutes before rewarding your cat with her meal.

It’s also a good idea to take a portion of her daily kibble and put it in a puzzle feeder so that she is forced “hunt” to retrieve it herself. Cats in the wild often save some of t heir food for a snack later too.

African Wildcats tend to eat their food to a flat surface. Once again, this is something that cat owners can recreate by serving meals to their cat on a flat plate or a specially designed flat cat dish, which allows the whiskers not to touch the side of the bowl. A cat’s whiskers are very sensitive and when they touch a bowl it causes Whisker Stress, which is uncomfortable to cats as they eat.

It’s also important for cats to stay hydrated and drink lots of water. If you have ever wondered why your cat likes to drink from a running faucet, well they are used to drinking running water in the wild.  You can recreate this situation by installing a drinking fountain. There are many on the market, which allow the water to bubble upwards and offer gentle movement in the bowl section. Or alternatively, there are designs that allow the water to trickle downwards which many cats love too.

Around midday, the African Wildcat seeks refuge from the elements, and predators and rests. Many climb trees or steal some time in burrows made by other animals. Our domestic cats exhibit similar behaviors seeking out snooze zones in the home. Thus you can further help create  “ a little bit of Africa” by offering your cat a nice tall cat tree or kitty condo, or even an enclosed cubby area designed for cats to create these elements in your own home. Cat hammocks placed at a window offer cats a safe view of the outside work and is a wonderful way to keep them stimulated.

Late in the afternoon, the African Wildcat spends time foraging, patrolling his home territory or basking in the sun and also utilizes this time to seek out prey for small snacks such as field mice, grasshoppers, locusts or small birds.  Thus domestic cats will enjoy spending time outdoors in a safe enclosure, which gives them a window on the outside world. Alternatively, make sure they have access to a sunspot indoors to enjoy and, once again, you can recreate the pouncing and hunting traits by initiating games with wands with feathery fun on the ends.

While out searching for an afternoon meal, a male African Wildcat will patrol his territory. If you live in a safe area, training your cat to walk on a leash will help to recreate this natural instinct. Alternatively, taking a cat out and about in the safe confines of a stroller is another way of allowing her to enjoy the great outdoors.

Just before sunset, the African Wildcat is out catching his last meal of the day. And, as darkness falls, will relax. The Purina experts observed that they are their most social after a meal, grooming and playing.

It’s very easy to involve your cat in social interaction at the end of the day by spending quality time, grooming her, petting her and engaging in play. This is also a way of burning off some of that excess kitty energy so that you can both sleep well at night!

The experts also highlighted the type of stresses the African Wildcat experiences and the many different scenarios that stress out our cats at home. You can learn more about the True Nature of Cats Program by visiting