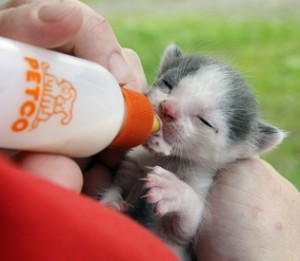 The day after an unexpected tornado hit the small town of Brimfield in New England wiping out more than a quarter of the homes in the area in June 2011, emergency services were still on high alert attempting to deal with the aftermath the devastating destruction. Paramedic Jonathan Hall was one of approximately 60 first responders at the firehouse when a tree worker walked in holding a days-old kitten he’d found clinging to life in a tree.

“Everything seemed to come to a halt,” recalls Hall. “Firemen and paramedics are by no means softies and can be pretty jaded by the everyday experiences they encounter. But suddenly all focus was on this tiny bundle of fur that had clung so tenaciously to life.”

The kitten was trapped so high up in the branches that the worker surmised that the only way he could have gotten there was to be have caught up in the force of the tornado and literally blown into the tree. Further, there was no way of knowing what distance he has been transported by the destructive high velocity wind. It could have been miles.

The kitten was passed from person to person as attempts were made to try and feed him.

“I remember someone calling out ‘he should be named Toto if he survived a tornado’,” said Hall, who, like everyone else present, was in awe of this tiny miracle of survival.

“He certainly helped to fleetingly relieve the stress and tension we were all suffering and I just knew we had to take care of him and get him some help.”

Luckily, the Boston Animal Rescue League had volunteers in the town helping with displaced and injured animals. So the kitten was turned over to their care.

Fortunately, there was a mother cat at their shelter nursing her own litter of kittens and she instantly allowed the newcomer to snuggle in and feed, and continued to raise the feline orphan as her own.

But the kitten had left an indelible pawprint on Jonathan Hall’s heart. Two months later, on the eve of the Hall’s tenth wedding anniversary, Jonathan’s wife Amy Waterman went down to the shelter and officially adopted him.

“He walked in to our home and settled down instantly and if he’s always been there,” recalls Hall. “We already had two older cats but soon after we adopted another kitten named Scooter because Toto was so rambunctious he needed a playmate of his own age.

“But despite having a feline playmate, Toto had formed a special bond with Jonathan and followed him everywhere. So Hall decided he wanted to try putting a harness and leash on the kitten and taking him places.

“The first time I did it, he simply strutted around waiting to see what would happen next. It was truly amazing. It was if he just knew he was different from the other felines in the household,” said Hall.

It goes without saying that one of his first places Hall took him was back to the fire station.  His story headlined local media and soon Hall was getting requests to bring him to local schools and events to show off the tiniest survivor of the terrible tornado.

The interest in the kitten gave Hall the idea to turn Toto’s miraculous story into a children’s book. So he teamed up with illustrator Carol Rusicka. And, because the kitten’s story reflected what the people of Brimfield had endured with such strength and tenacity, the Country Bank of Brimfield stepped in to fund the production of the book allowing Hall to donate all the proceeds to the Animal Rescue League of Boston.

To date, sales of this wonderful book have raised more than $25 000 – enough for the Boston Animal Rescue League to purchase a much-needed new rescue vehicle.

“It was nice to be able to have something good come out of all the tough situations people had suffered during the Tornado,” says Hall. “Toto’s story mirrors what a lot of people in town had gone through – losing a home and suffering tremendous hardships but also discovering that there were people out there willing to help and heal.”

Today Hall and his feline sidekick are celebrities on the streets of this quaint town with a population of less than 3 000.

“He goes with me everywhere,” says Hall. “He’s like a dog. The moment I put on his harness, he rushes to the front door because he knows he’s going in the truck.

Toto is a regular visitor at the local post office and the bank, where he sits with the tellers while Hall runs errands. He goes to the gym too and hangs out at the front desk while Hall works out.

“I am not a deeply spiritual person,” confesses Hall. “I’ve been a paramedic for 20 years and it can be a very tough profession. But there is something very healing about being in this cat’s presence and it’s just wonderful to see the way he’s brought the townsfolk together.

“The are only four roads in and out of Brimfield and every day I drive past some things that reminds me of that fateful day. He’s certainly changed my outlook on life and every day situations that I previously took for granted. And it’s wonderful that the whole town celebrates him too. At first, when we went out and about, people would stop and say, ‘Is that a cat?’ Now, everyone knows his name…”

Perhaps the Mayor should give Toto should the key to the town in honor of the way he’s united the town’s people. But the problem is, Brimfield doesn’t have a mayor.

Perhaps Toto should be nominated honorary mayor instead.